The video game industry may be about producing products that allow consumers to have fun, but it’s a serious business too. In the past several years, the industry has grown exponentially and over 2.3 billion video gamers worldwide.

The audience for video games used to be made up of children and teens, but today a large number of video game players span every all age groups, including the age group 75 years and over. 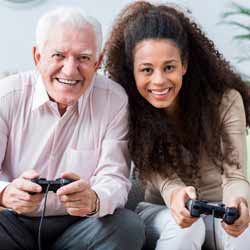 Who Are the Players?

Rather than being relegated to the stuff of childhood, an interest in video games in all genres is something that young people want and expect to enjoy as they reach adulthood.

According to the Entertainment Software Association, approximately 75 percent of people who are heads of households play computer and video games. The average age of a male gamer is 33 and the average age of a female gamer is four years older at 37 years old. Over half of computer and video game players stated that they expect to be playing games 10 years into the future.

What does this mean to a person who is considering a career in the video game industry? There is a ready and growing market for these products, which adds up to job opportunities in many facets of the industry.

According to Newzoo’s Global Games Market Report, they forecast that 2.3 billion gamers worldwide will spend $137.9 billion on games in 2018. This represents a 13.3% increase from 2017. They also reported that mobile video game revenues accounted for more than 50% of the global games market in 2018.

Companies in the Video Game Industry

The video game industry is made up of companies that specialize in developing software or hardware only. Some of them are known for working on both kinds of projects. For a prospective worker in this exciting industry, this means there are many opportunities to find a position that will be challenging, rewarding and lucrative.

Not only are companies in the industry looking for creative types to work on developing and testing new products, but there are other job titles available for people interested in working in other roles. Companies in this industry hire workers for functions like accounting, distribution, administrative support, payroll and the like.