People who are interested in playing video games have the option of taking their entertainment with them. In 2018, mobile video game reviews accounted for more than 50% of global video game revenues. 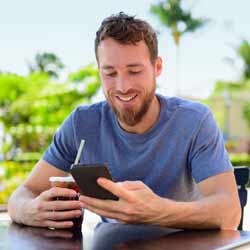 As cell phone technology has developed and these devices have become more common, consumers have demanded more from the products. The first cell phone games were limited in scope, since the screen on the phone was not especially suited to offering multi-colored screens or a variety of sound effects. The earliest cell phone games had very basic animation, which was usually made up of black squares.

Mobile games became more sophisticated when camera phones were introduced to the market. The updated technology that allowed the phone to capture an image meant that the units had a higher level of storage and graphics capabilities. As a result, the games available for mobile users became more complex. The benefit to cell phone providers of offering better quality games was that this leisure activity could be something they could market and profit from, along with the units themselves.

Modern cell phones now offer a degree of sophistication in their games that is similar in scope to game consoles available to the public now. Playing video games on cell phones is not as popular as on other mobile devices, since the game software tends to take up a lot of memory. Users do enjoy playing simple games like Solitaire and Tetris on their phones, though.

This game is a type of treasure hunt that is enjoyed by people from all over the world, including Antarctica. The object of the game is to use clues to find caches hidden in various locations. A cache is a container that contains a notebook, pencil and a small object that the players can trade. The game has been going on for a decade, and there are over 1 million caches waiting for players to discover.

As video game technology continues to evolve, demand for mobile games offering more features will increase as well. Video game companies will be responding to that demand by expanding their roster of qualified individuals who can predict what the buying public will respond to and meet that need by offering quality gaming experiences.