The term "video game" can be used interchangeably with computer games. Any game being played with a display advice is a video game. The electronic systems that players use are called platforms, and can range from a mainframe computer to a handheld device that the player can use anywhere. 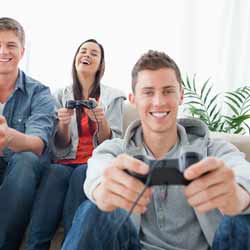 Personal computer games are played on the user’s computer, as opposed to a handheld console or a video game terminal. Early computer games were quite simple by today’s standards, but the technology for creating them has grown steadily over the years. Whereas the earliest versions featured simple graphics and tasks for players to complete, today’s games feature more realistic graphics and multiple play levels.

Personal computer games are created by teams of people working together, including game developers and artists. Once the game is ready to be released to the public, it may be published by the game company or through an independent publisher. There are many ways that a new personal computer game can be released to public, including on a CD or DVD, or being downloaded from the Internet. Some games are offered through online delivery companies.

Of course, online games, including those available on social networking platforms such as Facebook, have grown tremendously in popularity too.

Console video games are ones that can be played with a television or other type of monitor. A handheld device is also considered a console type of game, since it is equipped with a small monitor used specifically for the purpose of playing the game. Console video games include ones being played on the Microsoft Xbox 360, the Sony Playstation and the Nintendo Wii.

The Microsoft Xbox 360 was introduced to the public in November of 2005. This type of game platform is offered in three formats: Arcade, Pro and Elite. An Xbox live service is available which allows users to connect their Xbox to the Internet using an Ethernet cable or by using a wireless accessory.

The Sony Playstation comes with a hard drive and users can play Blu-ray disc movies on it as well as games.

Bluetooth technology can be used to connect up to seven devices, including controllers equipped with tilt sensors, to the Sony Playstation. Users may choose to replace the hard drive with a standard 2.5" Serial ATA drive. The system also supports the following The term "video game" can be used interchangeably with computer games. Any game being played with a display advice is a video game.

The Nintendo Wii was released in North America in 2006. This product doesn’t have an internal hard drive, but uses 512MB of internal Flash memory instead. Unlike other consoles of its generation, the Wii is not able to output high resolution graphics. The Wii comes with a unique-shaped controller that closely resembles a TV remote. Nintendo Wii users can also play Nintendo GameCube games and the system and supports up to four Nintendo GameCube controllers and two memory cards.