The first work on video games took place in the 1960s. Ralph Baer, an engineer working in the defense industry in New Hampshire, started wondering what else could be done with a television other than watching shows offered by the networks. He worked his ideas and the four pages he wrote formed the basis for future work on video games. 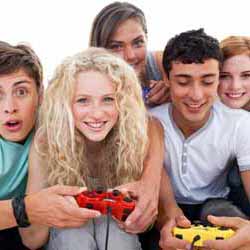 In the 1970s, Al Alcorn, an engineer working at Atari, was given an interesting assignment: Build a very simple video game. Alcorn’s game, named Pong, was installed in a bar in Sunnyvale, CA, called "Andy Capp’s Tavern." Pong had very simple instructions for users: "Avoid Missing Ball for High Score."

In less than a week. Alcorn received a call to come to check the machine, because the bar had customers who were interested in playing it and the bartender thought the machine was broken. When he checked the coin box, it was full of quarters. The game was a complete hit.

Arcade games were the next genre to hit the market. A number of games released in 1975 had a shark theme to tie into the popularity of the movie, "Jaws." Atari was the leader in the video game industry until Midway, a company known for manufacturing equipment for amusement parks, turned its attention to making video games. Midway’s first game was called Gunfight. A second game with a Western theme, Boot Hill was introduced in 1977.

Ray Kassar, the Chief Executive Officer at Atari, responded by licensing the home rights. Soon after, consumers were buying the Atari VCS console to play games at home. As a result, sales of the units doubled.

Pac Man, the popular video game from the 1980s, was a Japanese import that quickly became popular with players from all over the world. Nintendo had a very impressive 90 percent share of the market at that point, thanks to the popularity of games such as Donkey Kong and Super Mario Bros. When the company introduced the GameBoy in 1989, its market share increased.

The first game offered on the new system, Tetris, originated in the former Soviet Union. The puzzle was designed by Alexy Pajitnov, a computer scientist. Nintendo saw the game as the Iron Curtain was lifting and soon bought the rights. This turned out to be a smart business decision on the part of the company, since it sold 32 million units in the first 36 months it was available to the public.

Atari was an extremely popular game system in the early 1980s. Over 25 million game systems were sold during this time, and more than 200 games were developed for this system.

Activision was formed in 1979 by four former Atari employees: Larry Kaplan, Alan Miller, Bob Whitehead and David Crane. The new company released Drag Race in 1980, and this game was the first one made for the Atari system by an outside company. Other Activision games included:

Intellivision, a game system developed by Mattel, was brought to market to compete with Atari. The system retailed for $250, which was a higher price than the Atari version. Customers who bought Intellivision also received a Las Vegas Poker and Blackjack game.

Coleco’s product was designed to include add-ons, and by 1983 ColecoVision was the most successful video game company on the planet, selling 1.5 million units that year. The company offered customers the Atari 2600 converter. For $60, users could play their Atari games on the Coleco system.

When microcomputers were introduced to the market, this development opened up a whole new world for game developers and enthusiasts. Zork was the first game developed for use on the Tandy TRS-80. Later, a version for the Apple II was developed, and consumers liked this product enough to buy 6,000 copies in the first eight months.

By 1987, Beyond Zork was released. This version had an onscreen map that changed as the player moved into different rooms in the game. Players were also able to decide whether they wanted to assume a male or female persona, and they stayed in character throughout the game.

The graphics and features of home computer games continued to improve over time. Maniac Mansion, Monkey Island and Indiana Jones were titles developed by LucasArts.

Both single and multi-player games are available online. Game sites are updated regularly to keep Internet users interested and coming back for more challenges.

Massively multiplayer online role-playing games (MMORPG) are a specific genre of online entertainment where the players choose a character and control that entity’s actions in the game. Within the game culture, the characters evolve over time and interact with the ones adopted by other players. This type of game has been available since the late 1990s and is immensely popular with people from all over the world.

The Sony PlayStation was launched in the mid-1990s. PlayStation II and PlayStation III were very popular with users. At one point, the system was outselling products from the top five PC manufacturers combined.

Now gamers can choose from Playstation III, X-Box and Wii for their gaming pleasure. Over time, this form of entertainment continues to grow and develop as teams of designers and other dedicated professionals continue to develop new games for consumers to enjoy. The competition can only be a good thing for gamers, who will reap the benefits of having plenty of choice when it comes to this form of entertainment.

The top 10 best-selling console or hand-held games that were not bundled with a game system are: